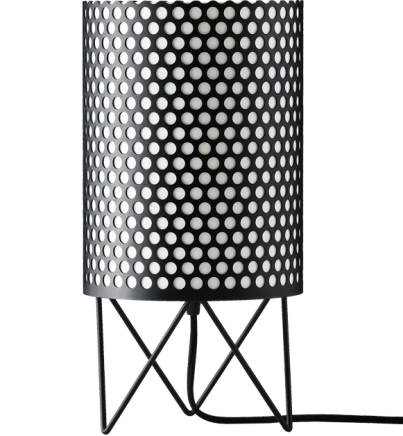 // Barba Corsini (1916-2008) was a leading functionalist architect who won international praise for his architecture and his design for La Pedrera. Corsini was strongly inspired by German architect, Mies van der Rohe and American architect Frank Lloyd Wright. He also had a great affinity to Finnish architecture, which he believed to be the finest in Europe on account of the powerful simplicity of the designs. ‘Powerful simplicity’ is perhaps an apt description of Corsini’s personal design style, as represented by the Pedrera series.

// Joaquim Ruiz Millet (1955 – ) created Galeria H20 in Barcelona in 1989, where he furthered his activities as gallery owner, cultural agitator, curator of exhibitions, and editor of books and design objects. During the renovation of La Pedrera in 1991, he discovered the beauty of the great floor lamp (PD2) and rescued it from being thrown in the trash. He contacted Barba Corsini in order to relaunch the original designs from 1955.